Our novice friendly event takes place in the village of Hathersage, in the heart of the beautiful Peak District National Park, and is easily reached from Sheffield, Manchester, Leeds and Nottingham. It’s an interesting and historic village, with links to Robin Hood and the Eyre family and a popular centre for walkers and rock-climbers. Why not hunt out the grave of Little John whilst you are here??  Over the years, this event has introduced many novices to the challenges and rewards of triathlon.

The 420 metre swim takes place in a heated, open-air pool with wide lanes making it enjoyable for swimmers of all abilities. As we will be setting the fastest swimmers off first, you will have the comfort to race you own race, in your own space. You will be asked to supply your estimated swim time when you register.

After the swim it’s on to the 21km bike and, with a name like the Hathersage Hilly, you know it won’t be flat! However, the hills are not so long or steep, and you’ll be rewarded with some stunning views of the Derbyshire countryside.

The 6km run is almost entirely through woodland and open countryside with off road running shoes being an option if it’s wet. Again, the run has a few hills but don’t worry too much – you’ll have our team of enthusiastic volunteers encouraging you on, and it’s a long, fast downhill to the finish line!

Did we mention, It’s not flat! This year we are excited to introduce, for the first time, our king of the hill sections on both the bike and the run so you will be rewarded for all your efforts. The event will be held under a BTF licence and operated in accordance with the current BTF Event Guidelines. If you would like to join the BTF please read more information here.

Results will be based on chip time. This is a non-draft legal race.

This event is for athletes of all abilities.

Race information will be emailed to competitors 1 week before the event.

Please register at least 1 hour before your scheduled start time and respect all social distancing measures in place. If you arrive after registration closes you will be unable to register.

On arrival at registration you will need to show your BTF license if you are a BTF member or some other photo ID if you are not.

You will be issued with your race pack at Registration.  This will include a security bracelet for entering transition, numbers for your bike & bike helmet, your main race number which you must wear on the bike and run sections. Your timing chip will be in your race pack and must be placed on your left ankle. Swim caps will be handed out at the poolside prior to your swim.

If you have a known medical condition, such as diabetes, asthma, allergy to penicillin, etc., please write the details on the reverse side of your race number and write

The 420 metre swim takes place in a heated, open-air pool with 4 wide lanes making it enjoyable for swimmers of all abilities. Swimmers are ranked by estimated swim time, with fastest going off first in the day, so you’ll be swimming with people of a similar speed. You’ll be given a brightly coloured, silicone swim cap to wear (and keep) that will be perfect for your first open water swimming session….., because we know you’re going to be hooked by the sport!

Set off every 2 minutes with a maximum of 4 in a lane at any time, we have plenty of swimmers every year who do this event head-up breaststroke. When you’ve counted your own 14 lengths, it’s out of the pool and round the carpeted floor into….

Next door to the pool is Hathersage Parish Council’s MUGA (Multi Use Games Area) with a cushioned surface, where you will have racked your bike in its numbered slot before the race.  Drop your hat and googles, don a shirt with your race numbers pinned on, if you aren’t wearing a tri-suit and tri-belt, shoes on, helmet on and clipped up before you touch that bike, and wheel it out onto the road, jumping on your bike after the mount line. 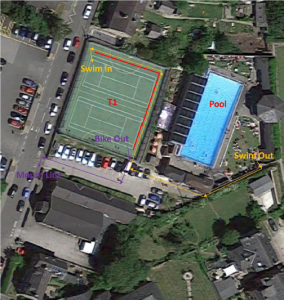 After the swim it’s on to the 21K bike and, with a name like the Hathersage Hilly, you know it won’t be flat! However, the hills are not so long or steep, Froggat being the ‘best’, and you’ll be rewarded with some stunning views of the Derbyshire countryside, including the famous ‘Surprise View’ which starts a long downhill back into Hathersage.

There are marshalls at key turns, and plenty of signage, so it’s really difficult to go the wrong way. You are expected to follow the Highway Code, and our Motorbike official will be circulating to check competitors aren’t drafting.

All the turns are left-hand, except one, a right-hander as you come down the hill into Grindleford – where we have a compulsory foot down and stop, to comply with the Highway Code and make sure you’re safe! The bike finishes on the flat just after David Mellor’s famous and award winning Cutlery Factory and Design Museum, with a dismount before the line marked on the road……..

Run your bike onto the grass of Hathersage F.C.’s pitch, and rack your bike in its numbered slot.  Then helmet off, change into trainers if you’ve been wearing cycling shoes and twizzle your tri-belt round so your number is on the front.

Lots of our novice competitors wear the same trainers for the bike and run, and have numbers pinned to front and back of a t-shirt, there’s no need to go splashing out for your first triathlon – we’ve seen mountain bikes, sit up and beg bikes, and even a wicker basket on the front. (Where else would you keep your cucumber sandwiches?)

Have a drink from your own sports bottle if you need, and it’s out of T2 onto the final leg…..the run

The bike and run routes will be well signed and marshalled.  However, it remains your responsibility to know the routes.

The 6Km run is almost entirely through woodland and open countryside with off road running shoes being an option if it’s wet. Again, the run has a few hills but don’t worry too much – there’s a long, fast downhill through the ferns to the finish line!

The bike and run routes will be well signed and marshalled.  However, it remains your responsibility to know the routes.

We actively welcome support and involvement from local communities, businesses and individuals. If you would like to find out more about marshalling, sponsorship or group bookings please contact us at the address below.

If you would like more info on this event please use the email address below:

There will be no medals awarded this year, but, in line with Sheffield Triathlon Club’s  commitment to always improving the environmental impact of our events, we will be planting a tree for each entrant and you will receive details of your tree and where it has been planted by the Forestry Company.

There will be no prizegiving  on the day and prizes will be posted to competitors once results have been ratified.

Health
It is important that you are fit to run and that you are following current government issued guidance with respect to Covid-19.

Parking and Transport
Free parking is provided for competitors. The parking area is situated on the B6001 between the pool area and the Football Club, opposite the David Mellor Cutlery Factory and Design Museum. The field used for parking is usually used for grazing animals, so please do not drop any litter. Please do not park in Hathersage village, in the Hathersage pool car park or anywhere on the bike course, which will be extremely dangerous for competitors.

Changing and Bag Storage
There is a secure baggage area available near transition number 2. We ask that baggage is kept to a minimum and you maintain social distancing while in this area.

Toilets
Toilets can be found at both Hathersage Pool and the Football Club.

Photography
Photography and video will be taken on the day and will be available through our website. We reserve the right to use any photography or video for future promotion of the event.

First Aid
There is a first aid tent located adjacent to the finish line at the Football Club.  In addition, there is a medical 4×4 response vehicle.  There is an Automatic External Defibrillator (AED) at Hathersage Fire Station, over the road from the swimming pool.

Hydration
It can get very warm in July, so it’s important that you’re well hydrated.  Start fully hydrated, keep hydrated and rehydrate at the end. There will be no water stations on the course.

We don’t offer refunds, but we will allow competitors to transfer their entry to a friend/colleague etc for a £5 fee, up to midnight June 19 2022, which can be initiated by completing the form here. Once you have submitted your completed transfer form, you will be sent a link to pay the £5 fee. Once paid, your transfer will be processed and the new entrant will receive a confirmation of their entry.

By entering this event you agree to the below terms and conditions:

By entering this event via Active Training World, your data will be kept in accordance with their Privacy Policy.

Your details will be passed onto the event organisers for the administration of the race.

Your name, gender, date of birth and email details will be used by their in house timing company (EventChipTiming) for the purposes of timing the event.

1) I declare that I am medically fit to compete & understand that I do so entirely at my own risk.

2) I understand that I enter the race at my own risk and that no person(s) or organisation(s) will be held responsible for any accident, injury or loss to myself, prior to, during or after the event.

3) I understand the organisers reserve the right to alter the arrangements and conditions, should circumstances require.

4) By entering this event, the athlete indicates acceptance of BTF rules.

The event is being officially timed by Event Chip Timing and the results will be available on the day at http://results.eventchiptiming.com

Results will be posted the following day on the Sheffield Triathlon Club website. There will also be a video clip of you finishing the event http://www.sheffieldtriclub.com/hh/

THIS EVENT IS AT FULL CAPACITY AND ENTRIES HAVE NOW CLOSED.

New membership are not allowed.